“The SUGAR MAPLE, or ACER SACCHARUM as it is known scientifically, was made West Virginia’s official tree by House Concurrent Resolution No. 12, adopted by the Legislature on March 7, 1949, authorizing a vote by pupils of public schools and civic organizations.  It produces an excellent wood for furniture, as well as maple syrup.  A single tree is 70 to 120 feet high and produces two to three pounds of sugar when “sugared off”; has a five-lobed leaf and produces a small wing-shaped pod.”  — (WV Blue Book)

“The sugar maple is one of America’s best-loved trees. In fact, more states have claimed it as their state tree than any other single species—those states being New York, West Virginia, Wisconsin and Vermont.”

“The sugar maple, West Virginia’s official state tree, stands out in the fall with its brilliant warm hues. The red maple may not share the same claim to fame as its cousin, but it, too, provides colorful foliage. West Virginia designated the sugar maple as the official state tree in 1949, after a vote by public school students and civic organizations. The tree is prevalent throughout the Mountain State.”

State tree: Sugar maple prized for sap, colors – In 1949, schoolchildren in West Virginia voted for the sugar maple to be the state tree of West Virginia. Three other states — New York, Vermont and Wisconsin — also selected the sugar maple, Acer saccharum, as their state tree. The leaf of the tree is best recognized as it appears on the Canadian flag. The tree thrives at elevations of 2,500 feet and higher and can reach heights of 80 to 90 feet and 2 to 3 feet in diameter.” They grow from southeast Canada through New England and the Midwestern United States, south to Tennessee and Virginia. They are found typically in deep, rich, well-drained soils. 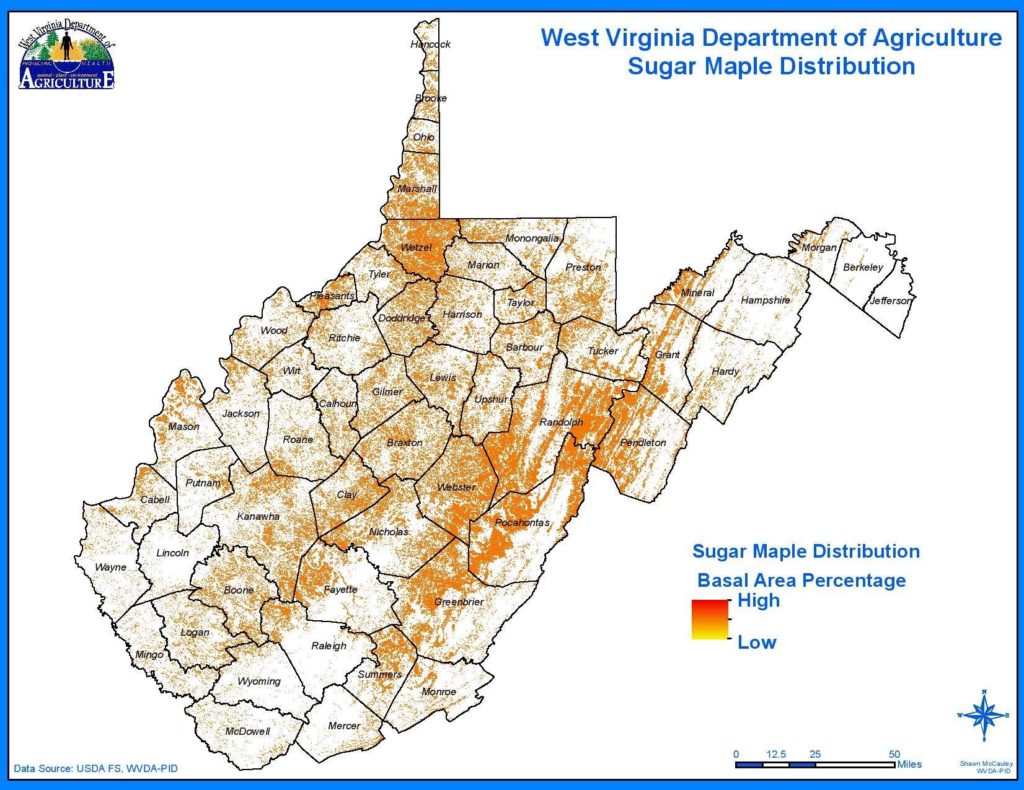 Often planted as ornamental and shade trees, they are prized for their fall colors of brilliant yellow, orange and sometimes red. The hard wood is used to make furniture, veneer, cabinets and many other items,” according to the U.S. National Arboretum website. The tree is the principal source of maple sugar. In 2007 in West Virginia, 2,773 gallons of maple syrup was produced. Each year, the Pickens Maple Syrup Festival takes place on the third full weekend of March.